Alongside the announcement of The Elder Scrolls: Legends – Alliance War a roadmap of the approaching content fans can expect to see in 2019 was also revealed. Check the roadmap out below and stay tuned for more information on the included content later this year. 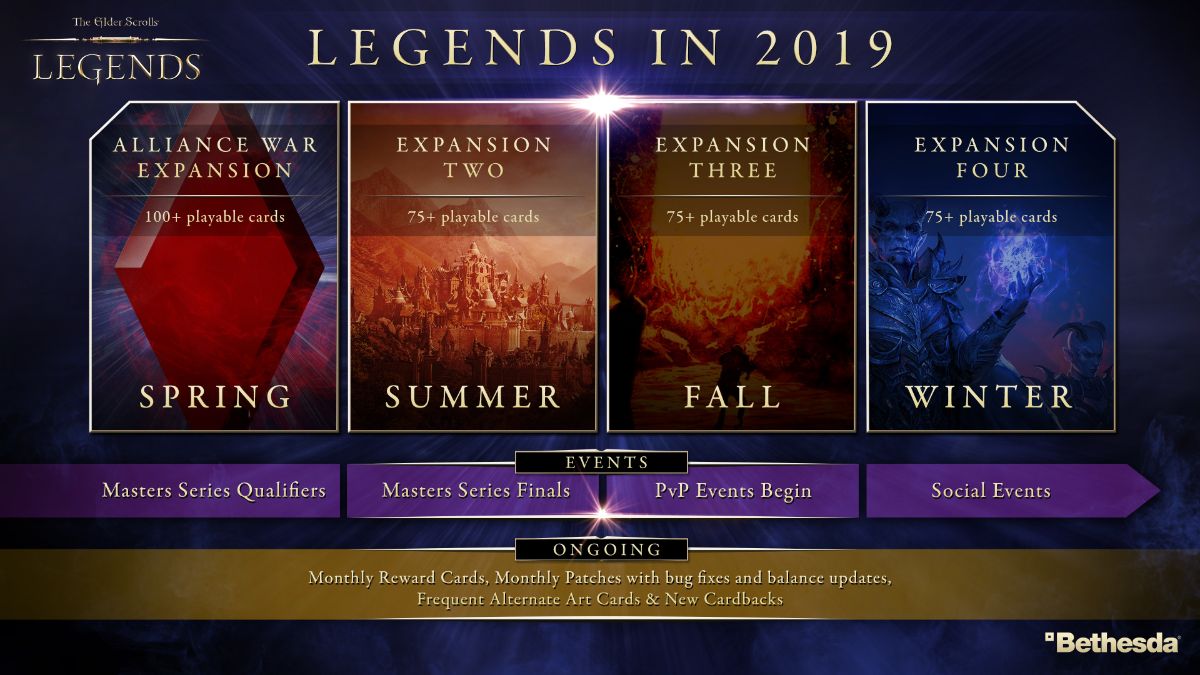 The meta game will make its biggest change in Legends history with the new expansion as new mechanics – such as Mobilize and Empower – along with five new card color combinations are introduced. Fans of Elder Scrolls Online will recognize the Daggerfall Covenant, the Aldmeri Dominion and the Ebonheart Pact, but two new factions, the Empire of Cyrodiil and the Guildsworn, make their arrival in The Elder Scrolls: Legends – Alliance War:
Empire of Cyrodiil – Willpower, Agility, Endurance
Fallen from prominence, the Empire clings to its last shreds of power at the center of the conflict.
Daggerfall Covenant – Strength, Intelligence, Endurance
A faction of Redguard, Breton, and Orsimer seeking to restore the Second Empire of Men under the rule of High King Emeric.
Aldmeri Dominion – Intelligence, Willpower, Agility
Altmer, Bosmer, and Khajiit faction seeking to reestablish Elven dominance over Tamriel.
Ebonheart Pact – Strength, Agility, Endurance
Contentious alliance between the Dunmer, Nords, and Argonians formed out of necessity to preserve their independence.
Guildsworn – Strength, Intelligence, Willpower
A coalition formed between the Fighters Guild and Mages Guild to protect the people of Tamriel from the collateral damage of the war and the Daedric invasion.
Players can visit The Elder Scrolls: Legends website to pre-order and find more information on The Elder Scrolls: Legends – Alliance War. While you’re there, be sure to check out the new card back, available to all players who pre-order or purchase the expansion. You can also learn a little more about Mobilize and Empower, two of the new mechanics coming to the game.

The Elder Scrolls: Legends – Alliance War is available for pre-order for €49.99 and includes 50 packs from the brand-new expansion, one Legendary Pack, the Warmonger title and the exclusive premium card back.